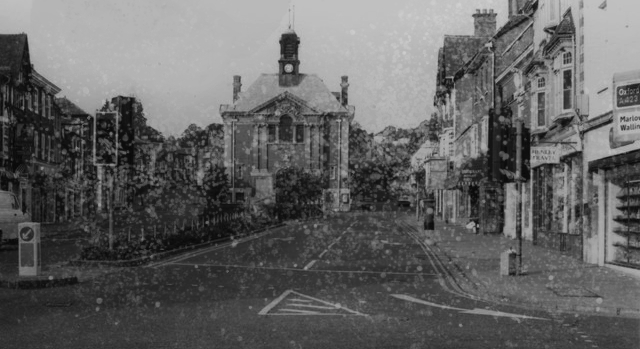 I went to a local comprehensive, about three miles from where I lived. It collected up the kids from a radius of scattered villages in the Chiltern hills, delivering them on rickety Taplins or Chiltern Queen coaches in a chunter of diesel each morning. One year, I think when I was in the second or third year, (now it would be year eight or nine) the school went on strike. In a sudden burst of mass disobedience, all the kids locked themselves in the tennis court. It was thrilling. The issue was that the staff themselves were striking, there was no lunch cover and kids were having to walk home, often several miles and back, in the space of an hour. Our protest didn’t take account of why the teachers were striking. We probably played nicely into the hands of the conservative local papers; another stick to beat the leftie teachers with. But you can’t have it all.

The strike was organised by a boy called Mark, who in the last year of secondary school. He was gruff and serious, with thick dark hair that stuck out, dark eyebrows. He was good looking but forbidding. At sixteen he seemed almost like a man to me. He had asked me, a few times, to go out with him. I was slow to get ok with the idea of boyfriends and said no every time, in embarrassed horror. On the day of the strike, once he’d locked us all into the tennis court, he asked me out again. He seemed so bold and noble in the thrill of that disobedient crowd that I said yes. He smiled, a huge smile, and said ‘really? Oh brilliant!’ I recoiled in a small horror; the thought of having that much influence, the ability to affect someone in that way was new and kind of burdensomely repellent. The thought ‘what do we do now?’ echoed with slight menace. As I said, I was a bit of a tentative starter with boys.

I don’t remember how the strike ended, and will be interested to hear the memories of re-connected school mates. I don’t remember what happened to that first great romance of mine either, but I suspect we spent a few weeks maybe hanging out in the corridor, maybe with me avoiding seeing him and then I broke up with him. I didn’t articulate it but ‘boyfriend’ felt like a horrible responsibility, one I wasn’t ready for.

Mark left school, was one of the first people to become a punk. At fourteen, I experimented with a couple of safety pins on my Topshop bomber jacket, worked my way with a bunch of others into the full regalia via lurex socks and plastic sandals, started making my own clothes. I bought kilts and string vests at jumble sales and sold them to other kids at school. As older punky teenagers, Mark and I hung out in the same town square group. He was the best punk. He bleached his hair, tried to dye it pink but the only option then in that staid town was old-lady rinses. Not very shocking. But he was shocking enough for Henley. He got arrested often, beaten up often. Sometimes we would go to London, someone would buy some pills in Piccadilly tube. I’ve never been that bothered by drugs, but lots of my friends have been. With varying degrees of failure. Mark took his share. He was serious, taciturn, uncompromising. And he took drugs determinedly, got beaten up by the police, took everything further than everyone else. I was in awe of him, slightly intimidated.

For a while he became a skinhead. Quite a few did at that time. Mark’s friend Trog became a good friend of mine too. Then quite suddenly Mark disappeared. I can’t remember how long for. It felt like years but was perhaps a year, or half a year. Things change so quickly when you are young. I had moved on to new friends, was doing A levels. One day I bumped into him. He was wearing completely straight clothes, jeans and a denim jacket. The weird sight of un-dyed, un-spiked hair looked so jarringly young. I was shy because Mark was always so serious. But he beamed at me, ‘aren’t you going to say hello then?’ We went for a coffee in the town square. I had a magazine, or there was one there, and we did the personality quiz. It was nice. For a while, we would meet on Saturday mornings before I hooked up with the rest of the group, just go and have a coffee together, do these quizzes, laugh at the silliness of the magazines. It was odd, to have this friendship not based on romance and untethered from a social group. Almost clandestine, if it hadn’t been so cheerfully friendly. We just seemed to get on. Mark had gone back to live with his dad in his home in the woods. He had just wanted to get sorted, get away from it all, from himself, from drugs. He seemed happy; balanced. It was lovely.

I was at sixth form when I heard that he had killed himself. He had left town for a while. I don’t know many details, and it isn’t my place to talk about the ones I do know here. But there was a real hoo hah in my school. People wailing. I know now that all have their right to a generalised kind of grief, that death is shocking. But I was horrified at the time. Sickened by the frenzy, the spotlight-grabbing claims of closeness and special pain.

Trog called me, offered to take me to the funeral in Hastings. I was set to go. I was sad, I wanted to do the right thing. But I bottled it. In part I wanted out of the carnival, but also I was a coward. Mark was the first person I knew who died. And I bottled it because I was scared of the grief. I’ve always regretted that. No one would notice if I was there or not. Plenty of other people were closer to Mark than I was. But I felt, still feel, that I let him down, that I didn’t honour that light and precious friendship. I should’ve gone to show that he mattered to me. But I was too young then to understand how important that is. There aren’t many things I regret, but that is one of them. I’ve said goodbye in different ways since. Once whilst having a pint with Trog, and Mark’s dad, who asked me if he could have one of my rollies. He took my hand and said ‘I’m so glad to know Mark had such good friends’ and I felt less guilty, felt perhaps I’d mended the glitch.

I don’t still feel guilty, just an echo of the sadness we have for all lost friends. Trog too is one of them. I’m really sorry I lost touch with him. He used to turn up in his Cortina, knock on the door and loom on the threshold in a tonic suit and Cromby and in a voice deep as an ocean trench ask my mum ‘is Lou coming out to play?’ I didn’t hear he’d died until years after. It seems extraordinary now to remember how easy losing touch used to be.

I didn’t know how to end this, but saw that my lovely cousin Tom is fundraising for a charity that aims to prevent suicide. I’ve put a small donation towards his goal. If you fancy giving Tom and his cause a boost, here is the link.