I can’t deny that starting a second crowdfunding campaign is daunting. But it’s also exciting. I am really happy with Salt Lick and hope it may appeal to a range of readers. I thought I might share with you where it came from, some of what made me write it.

The first inkling of the book was an image of a man in a prison cell, isolated and sunk deep into the sole company of his imagination. In the absence of any place to be, anything new to see, he takes imaginary journeys through the inside of his own body, picturing it as though it is a terrain. The title was going to be Wetlands, because I thought of the inside of the body as wet. But that is a title used fairly recently by quite a high-profile book so it didn’t survive.

This man was under a kind of imprisonment that was quite isolated; automated and hardcore. That lead me to imagine the world outside of prison, an authoritarian, libertarian future England, cleaved off in stupid isolation from the rest of the British Isles and Europe. The political context,  populism and rising nationalism, leading up to Brexit as I wrote the book, became a key influence. I wanted to look at our ability to shut down, to do as we are told regardless of the harm to others, to sink into an infantile passivity, just so long as we are clothed, fed, and sufficiently diverted.

The other hugely important influence was a song by American country band, The Handsome Family. It is called Peace In The Valley Once Again. It is one of my favourite songs, and it gives me enormous comfort, describing as it does a world that will re-emerge, a nature that will reclaim and overrun all our failures and excesses. It’s a song I would pick to have at my funeral.

I wanted to imagine England as once more a wild and empty place. I wrote to Rennie from the Handsome Family and she gave me permission to use the song lyrics as a frontispiece in the book. 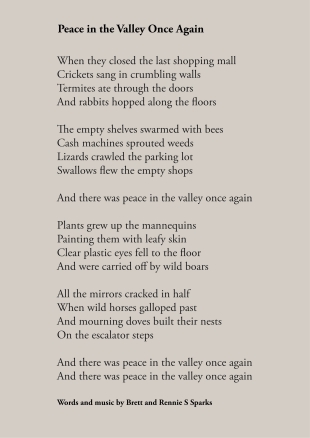 That song has crept into the writing of Salt Lick in numerous ways. Mainly in that I don’t see the book as dystopian, even though the politics is grim. I see the book as exploring one of many possible changes. And the politics is grim not because it is some extraordinary future, but because it is an imagined continutation of where we already are. Truth is that much of what we live with now is already grim.

But much of the book deals with hope, with how we adapt to change and how we make the world around us in new ways for new circumstances. I am an optimist, and think us humans are capable of amazing things, even turning around some of our own huge mistakes. Salt Lick reflects that optimism. But if we don’t manage it, then at least there will be peace in the valley once again.

If you would like to support Salt Lick or read an excerpt, you can on the Unbound page.