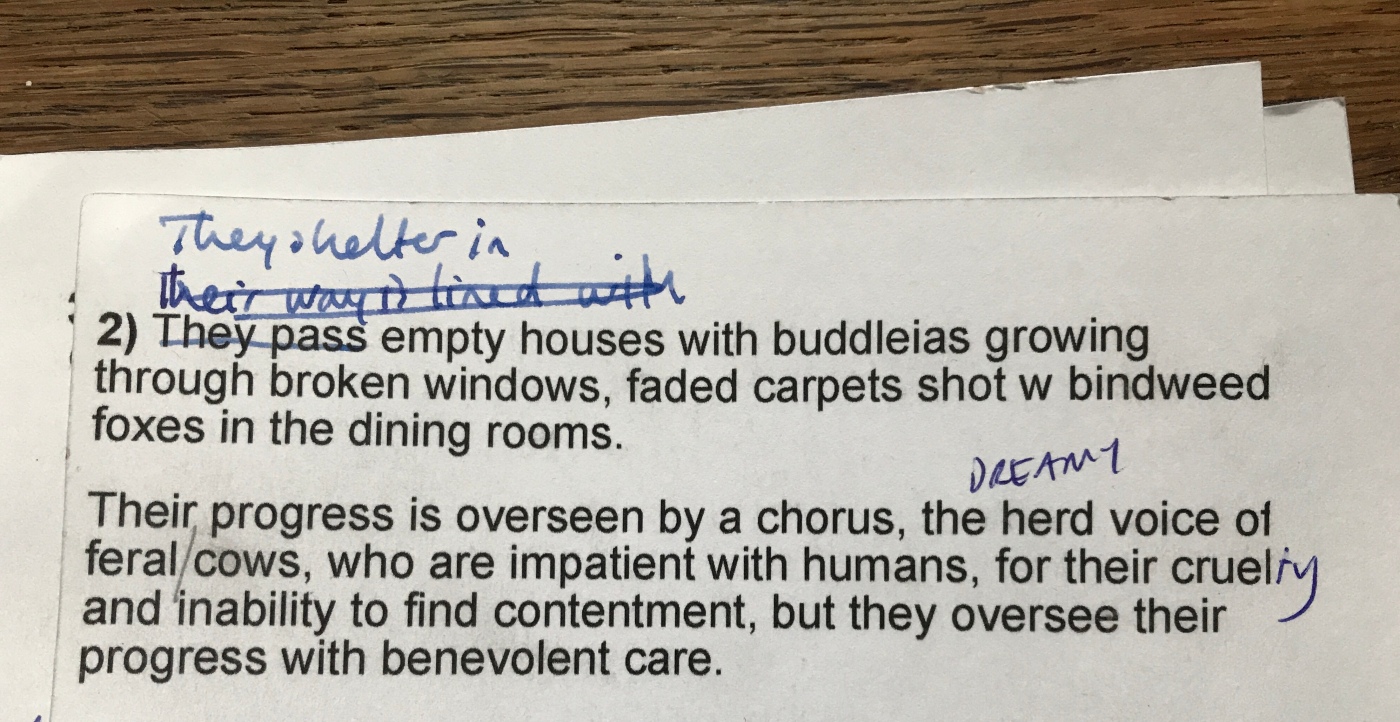 Last Thursday I was lucky enough to take part in the annual Write Stuff competition at London Book Fair. I was one of six unrepresented authors pitching our novels to a panel of five literary agents. I am really pleased to say that I won.

As summarising and blurbing and elevator-pitching is one of the things I find difficult, and as this experience left me feeling so much more capable I thought I would unpick my approach, in case it is useful for anyone else who struggles with this aspect of being an author.

The allotted time was three minutes and it was suggested that we include a bit about the book, our inspiration for writing it, and where we felt it belonged in comparison to other, similar books.

I started with my existing synopsis, pulling out key phrases, and slowly whittled it down to its one-minute bones.

I used pen and paper, notes, arrows and doodles and underlines – the mess for me helps order to emerge. I then used (as I often do when trying to pull order out of something unformed) a digital mind-mapping app because I find it useful to move and recombine small chunks

of text. It took several goes over a few days. I included too much, found it difficult to leave out all the things that mattered to me. Spreading it out over time helped me be necessarily brutal with what I kept.

One useful tip from Sam Missingham was the simple phrase ‘What is at stake?’ It is a helpful question to take you to the central pivot-point of your text.

My books fit into the category literary fiction. I have always made the assumption that part of the appeal will be the writing. But there is a big difference between a reviewer or reader saying ‘it is beautifully written’ and me standing up in front of a bunch of people saying the same – for many reasons, it’s not possible. Beauty is in the mind’s eye of the reader. But, like most authors, I care about the language I use when I am writing so I decided that I would try to give a flavour of the way I write in the language of the pitch.

The inspiration was relatively easy, though it still took time to drill down to key components. One of the main inspirations came from a song by the Handsome Family that imagines nature reclaiming a shopping mall. Salt Lick imagines we have travelled further down the wrong path into a future that is not dramatically post-apocalyptic, but is an intensification of the bad things that happen already.

I asked fellow authors in an online group for ideas about books that would provide useful comparisons. A friend suggested that the book, though a novel, had something in common with nature writing by Robert Macfarlane. This was such a true and useful insight (thank you Stephanie Bretherton!) because it gave me a new, surprising view of my own work and made me see that I had been too literal and narrow when searching for comparators. Broadening my search helped me find some useful connections – such as The Power because it sets our gaze back onto our current reality from a different angle and Salt Lick, though quite a different book, I hope will do the same.

Once I had something that I could read easily in three minutes I started to work on delivery. Gulp. I am actually fairly relaxed when talking to new people, even a bunch of them sitting in chairs. I am enthusiastic and gregarious by nature. But as soon as a camera or a timer is involved I sound like a slightly amplified, cardboard mouse. I filmed myself a couple of times (if for nothing more than the crushing realisation of how true that description is) and tried to improve. I knew I could tell one person, with passion and enthusiasm, about my book so I imagined I was telling one person. The words became easier the more I practiced. I whittled them further to cue-cards and tried not to read. I did it, spoke it, read it, many times.

My secret weapon was imaginary confidence pills. Yes, that daft. I know how we think can affect our body’s responses. I knew it would help me if I felt confident. I suddenly had the idea that I would take an imaginary confidence pill and that would sort it. And, dear reader, it more or less did. I was nervous and excited but I had practised my pitch AS THOUGH I were confident about it – and I popped an imaginary pill before I did my bit too!

I ran out of time, but as there were questions afterwards, there was some leeway. The feedback from the agents was really positive. The strategies that I worked out for this event will, I believe, serve me well. What’s more, it feels as if my own connection to the book has been strengthened, tempered by the process and that has to be a good thing. It was a thoroughly rewarding and worthwhile experience, so thank you to The Write Stuff, the other authors (whose books sounded really fascinating) and the agents who were so generous with their time and attention, Dr. Alison Baverstock, Associate Professor of Publishing at Kingston University, Ludo Cinelli, James Spackman, Katie Greenstreet, Lisa Babalis and Heather Holden Brown.