It’s morning, the day is my friend, I inhabit it calmly. Not badgered by lists and plans that require me to stretch it beyond its natural limits. The day doesn’t always respond kindly to this rough usage, it becomes withdrawn and places its wonders before more receptive eyes.

Standing just now in the kitchen, clearing the draining board, I stopped to look with a modest measure of longing and hope at the empty bird feeder that two days ago I hooked up on a bare branch. It is, I fear, a difficult spot for the birds to find, over cement, between two houses. But I can see it both from the kitchen window and here where I sit to write. I was out all yesterday and haven’t seen any birds today. But the lady who sold me seed said they will find it, and if they don’t, I’ll move it.

As I gazed upward to the bare branches where it hangs, there was a third reminder this morning of the ravages of grief. An album of songs written about it was featured on the background radio, for those grieving, for loss. One song was called My Heart Goes Out To You.

Two days ago, my eighteen year old daughter lost a friend. Earlier this morning, the second reminder, she came in to my room and we sat on the bed and talked about death. Lots of it, lots of versions. Our final absence from life, how we deal with the death of others. I asked her to try to come to terms with death, to think about it often, to disempower the fear of it. As with many teenagers, as with my younger self, she has often been afraid of dying, of losing a loved one and of the grief that follows. We talked about how rehearsing these fears can make it feel as if one has predicted, as if a premonition made one know that the news of a death was due.

We talked, because she feels an ache in her heart for the parents of her friend, of the difference between empathy and sympathy. I feel a fierce love for the passion and care that my daughters bring to life, their concerns for the world, their anger at injustice. But perhaps our sympathy, in respecting the boundaries of emotions, in not claiming them for ourselves, is the more useful gift than empathy that can drown us. We are no good to others if we let a taste of the pain they suffer consume us as well.

We talked about the waste of living life in fear of death. We decided that was like going on a dream holiday and ruining it by spending the whole time fretfully imagining the plane ride home.

The impetus for writing Twice the Speed of Dark was an experiment I did with caring about death. I was struck, like many, by the difference between the news response to victims of the Boston Marathon bombing and the contiguous relentless and mostly ignored deaths from terrorist bombs in Iraq and Afghanistan. I wondered about the people who were dying in market place bombs and bus bombs. In real time, (though not able to account for every death) I wrote portraits, to imagine the victims in life, to try and understand the reality of their death. The gifts of this process was an awakening of a kind of love for strangers and the marvellous discovery that what I wanted to be was a writer. But it was gruelling. It made me so sad to dwell on loss, to think about the dead and the families that would mourn them. I kept it up for a few weeks, but there was no conclusion and I had to stop. Even when I came to write Twice the Speed of Dark around the same idea, I could find no satisfactory conclusion. (The book centres on a woman grieving for her child. I came to understand that there was no coincidence in the timing. I began writing it a year after my step brother died suddenly. A year after feeling and observing the harrowing of grief in my family.)

Today is Holocaust Memorial day, the first reminder of grief. It is easy to become overwhelmed by what that means.

In my early twenties I read a book of poetry by Kevin Gilbert, an Aboriginal born into the Wiradjuri nation. He was an artist and activist as well as a poet. My sister bought me the book when we were together on a trip to Australia.The poems are full of ferocious, political soul fury, and heavy with loss. They made me cry.

Appropriately, it came to mind this morning. I have an associated memory of when I first read the poems, a moment of angry self-admonition. A harsh but perhaps reasonable insight suddenly that no one needed my tears. I couldn’t do anything to help the aboriginal people by showing how deeply I felt their pain. Yes, perhaps this is harsh. But I am fine with a bit of harsh now and then, it can be useful. Because there is some truth in it. The emotions of others matter, but not because I can feel them too. In this political context, perhaps I have no right to feel that pain, perhaps it is an indulgence. I don’t know for sure. It felt a little as if I was taking away something more, taking emotions that were not mine, and making them mine. Really what I needed to do was give. Give strength or love, if it would be useful. Particularly in this context, that of politics as well as soul, give actions.

I think as I have got older that I see it slightly differently. Sympathy may sometimes be a more useful and even respectful response, but it is possible to have empathy for us all. For the human animal. For the sisterhood and brotherhood of people without the delineation of creed or nationality. For the faltering glories and harrowing failures that will exist as long as we do. It’s for all of us to carry that.

And for those dealing with personal losses, my heart goes out to you.

There are still no birds, it would’ve been nice to finish this by describing the first arrival, a sparrow maybe, or a starling. But I still gaze, with my small measure of hope and longing and wait until they come.

Twice the Speed of Dark – https://unbound.com/books/twice-the-speed-of-dark 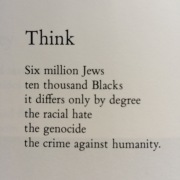 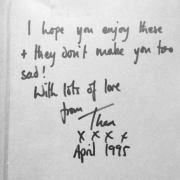 One thought on “Waiting for the birds”